The hardware requirements for running the BLE Secure DFU Bootloader example are:

The software requirements are:

Once you’ve got all the hardware and software installed, you’re ready to move on to the next step.

Here are the general steps needed to add and perform Secure OTA DFU over BLE for your nRF52 project:

4 – Flash the Bootloader and the SoftDevice to the nRF52 DK

8 – Discover and Connect to the DFU Target

In the example above we included only the application in the DFU package. However, in many other cases, you would want to include a combination of Bootloader + SoftDevice + Application. Below is a table (taken from Nordic’s nrfutil documentation on the combinations supported in a DFU package along with the guidelines and restrictions on some of the combinations: 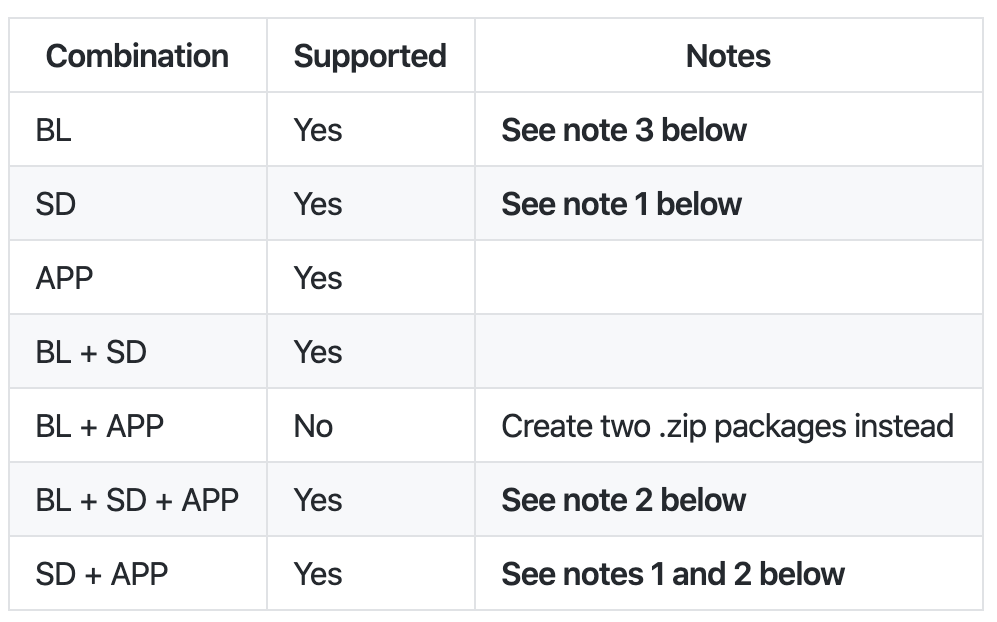 Note 1: SD must be of the same Major Version as the old BL may not be compatible with the new SD.
Note 2: When updating SD (+ BL) + APP the update is done in 2 following connections, unless a custom bootloader is used. First the SD (+ BL) is updated, then the bootloader will disconnect and the (new) BL will start advertising. Second connection to the bootloader will update the APP. However, the two SDs may have different IDs. The first update requires --sd-req to be set to the ID of the old SD. Update of the APP requires the ID of the new SD. In that case the new ID must be set using --sd-id parameter. This parameter was added in nrfutil 3.1.0 and is required since 3.2.0 in case the package should contain SD (+ BL) + APP. Also, since version 3.2.0 the new ID is copied to --sd-req list so that in case of a link loss during APP update the DFU process can be restarted. In that case the new SD would overwrite itself, so --sd-req must contain also the ID of the new SD.
Note 3: When creating update packages of bootloaders compiled from nRF5 SDK 15.3.0 and higher, nrfutil version 5.0.0 must be used. This is because of changes to the bootloader projects in the nRF5 SDK, and if an old nrfutil version is used the size of the generated packages will be too large.

To expand on these guidelines:

In practice, you may want to include the Bootloader, SoftDevice, and Application all in one DFU package. For example, this would be useful if you want to create a DFU package to program many devices via UART or USB which can save a lot of time versus having to do it via the OTA DFU process. A device that contains all three (BL + SD + APP) will be able to boot into DFU mode on demand while being able to run the Application in normal operation.

In this case, we need to include the Bootloader settings in the package so the BL recognizes the APP included and launches it. A couple of tools are utilized to achieve this:

To generate the BL settings, we run the following command:

Make sure you assign the version numbers to the appropriate values, incrementing with each new version for the application and bootloader versions. The bootloader settings version number is defined as follows:

Next, we merge the two hex files (the BL hex file + BL settings hex file) by running the following command:

We can then take this resulting hex file and merge it with the Application hex and the SoftDevice hex. This can be done with the mergehex tool once again:

Now we can take this resulting hex file and flash it directly to the target(s).

Note: This output is not valid as a DFU package, but rather a hex file that can be programmed to many devices in production.

When you’re working in development mode and do not want to worry about version numbers, you can include the --debug-mode flag when invoking the nrfutil pkg generate command. This will allow the bootloader to skip/ignore the version numbers, so you can flash a DFU package again and again without having to increment the version number.

Note: It is extremely important to make sure this flag is NOT included in any DFU package used in production.